A short sharp enjoyable tale of magic and the unexpected…

Having just read this book in one sitting I found myself enthralled by page 4 where the story unexpectedly flips and takes the reader on a journey of folklore, witchcraft and murder.

With darker tones and a magical theme that merge together well, Rebecca Crunden delivers a well-written tale that might only be twenty four pages long, but it represents hundreds of years of history and lore for the title character. Throughout, the addictive writing style carries a humour that is both fun and perfect for the genre while the imagination is also given plenty of room to work alongside that history and lore suggested here – as the ending promises, that’s the start of the next story!

For anyone looking to be whisked away only for a short time but through some imaginative literature, this is the one for you.

‘Screaming would have been the sensible thing to do; it also proved impossible. Screaming would mean she’d be able to unlock her jaw and at the moment it felt like her jaw had rusted shut…’

The Ghost Beside Me by Lee Hall

If I could just break away from the shackles of that internal torment I have created that imprisons my confidence. Just the idea and thought of tackling this enigma of feelings spirals my own self into a deep sadness, hence my lack of entries in the past days.

I’ve been meaning to try one of Lee Hall’s books for a while now, and I don’t have the attention span for a long book right now, so this novella was just the right size! And I do love a good ghost story. Further, I kind of love the kismet of picking this one up now, because the writing style actually really reminds me of the start ofFrankenstein, and I’ve been discussing Mary Shelley all week. ’Twas meant to be! Not that I would liken the story lines, that is, just the stylistic…

There have only been a handful of times in my life when something has happened that cannot be explained. Many of us have experienced the same; from the cliche odd bump in the night or the feeling of being watched to even something lurking in the corner of your eye. I’m a sceptic and even after this encounter and another after that, I still am. But to this day it still remains unexplained, so let me take you back to the summer of 2013…

Like the year previous I had joined my significant other and her family on the annual summer trip to the south of France; a beautiful place all year around; in the summer the weather is a hot as Spain and this is accompanied with the forest backdrop that could be England but way more rural.

Our road journey was around 10 hours plus and on this year my S.O and I were joined by some close friends. The accommodation and our home for two weeks would be on a former farm converted into ‘gite’s’ – barns which now serve as self catering holiday homes. Of course with our larger party we were in the 12 berth gite. Located on forest surrounded hills and farms, this place truly is picturesque and remote. All roads leading there are single track and you can even hear how quiet it is; bliss. This is without mentioning the stunning Jurassic Park like views.

Our rooms were decided upon arrival and so myself and my S.O took the top left area. You can see from the pic above the window in which our bedroom was and this was the left hand wing of the gite. Up wooden stairs and a left hand turn into an alcove half way up would bring you to a narrow corridor which then faces another corridor leading left and right with a bathroom between a pair of rooms. If you were to go further up the stairs instead of turning left it would take you up to a living room area and then moving right would take you to the higher section of the gite and to more bedrooms on the right wing – this is where a pair of our friends took a room each. It is worth noting the stairs which were varnished wood had been installed by way of slotting into the wall; you would have to literally tip toe not to be heard and they made a distinctive ‘drumming’ when anyone walked on them.

After what was a long travelling day, we had eaten dinner and the general mood amongst our camp was good and fun; we were in the usual spirits of exchanging stories, jokes and generally messed around like we always did in each others company. We were on holiday and things were good.

Eventually it was bed time and so myself and my S.O went back to our room and began to unpack our stuff. At this time everyone else was probably doing the same or going to sleep and so silence ruled over the gite for the night.

Whilst I decided not to fully unpack I got myself into bed and as my S.O was considering joining me our bedroom door softly opened. The door was previously closed with a handle that requires pulling to open.

At that moment neither of us were startled and I thought about perhaps yelling an expletive at probably a prankster in the night. Instead I walked up to the door and behind it was nothing but the darkness. Now there was probably enough distance for whoever decided to play this prank to be easily discovered and still I didn’t see a soul in sight. Upon walking out and even getting to the stairs I expected the culprit to be huddling somewhere but there was nothing. Being one of rationale I shrugged my shoulders and returned to bed, this time locking the door.

The next day I quizzed those who I consider to be behind such activities to no avail. To this day nobody has admitted to opening that door. It’s worth mentioning on that night the window in our room was not open and as far as I can remember there was no strong winds or even a breeze outside.

My answer wouldn’t point towards the paranormal until the owner of the place mentioned in passing to one of our party about this particular gite being ‘haunted’; not a lot of sleep was lost as this was mentioned on our final day. The story even developed to be one of a little girl who can be seen around the extensive forest surrounded site.

Because there are so many variables, I spent some time being very sceptical on the matter. We had even returned the next year to the same place and nothing had happened for the whole duration of that trip.

Even though I was slightly wary that next year it wouldn’t be until 2017 when something else happened involving ‘The Stairs’... 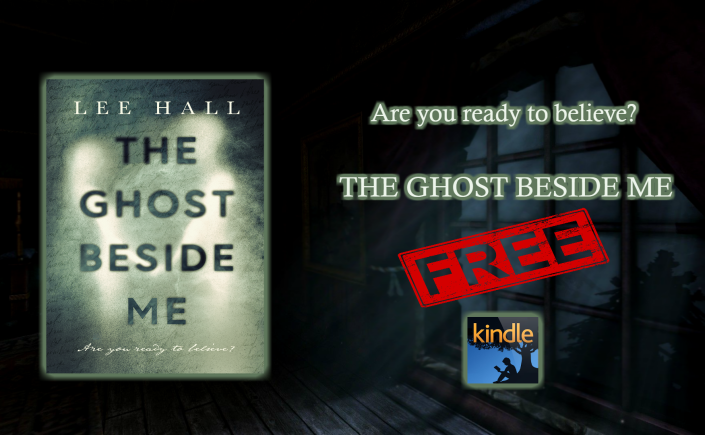 Wishing you all a safe and happy Halloween. Wherever you are I hope it’s a spooky one.

To celebrate the culmination of spooky season my 5th book ‘The Ghost Beside Me’ is Free to download today only. I’ve been waiting nearly a year to promote this ghostly tale that marked one hell of a milestone for me and a return to releasing books after nearly walking away from writing…

‘Ghost’ is a diary style tale account about one soul who spends his days introverted and tormented by loneliness until a ghostly companion begins to try and make contact. Eventually they become more than acquaintances in what is a short but powerful tale of love, life and death. It can be read in just a few sittings or even just one; perfect for the spookiest night of the year. You can find the various links below:

You should know by now that here at the Hall of Information we love a good novella and this one fuses history with some serious ghostly spookiness. The prohibition era meets the supernatural as K.Noel Moore tells a story that’s readable in just a few sittings and will make for one of those perfect reads for Halloween.

There’s a lot going on under the surface of a story which sits within the realms of gritty urban horror, mystery and witchcraft. While it is a complex story it’s also very well executed by K.R. Rowe. The whole layout of the book from short sharp chapter length, to characters all the way to general story has been well thought out and makes for some perfect spooktober reading. Be warned this one’s a little brutal – I’m kind of numbed to that sort of thing…

Be careful with dreams, they may come true….

Most of us can relate to the struggle of fitting in at school and Kristina Gallo has used that as inspiration to tell this story with a supernatural edge that guarantees to satisfy. It’s a shorter read but still manages to entertain. This one I recommend for Halloween but the other works of Kristina I highly recommend also! You can check out a recent Hall of Information interview with her here.…

I’ve mentioned before that I enjoy space science fiction quite a lot and my go-to author of that genre is Christina Engela who once again provides another awesome series but this one contains some chilling but fun spills that begins with ‘Dust’. The ‘Panic! Horror in Space’ series is well worth a look for some awesome Halloween spooky goodness.

Did you expect any less than a little shameless self promotion? Let’s face it, you’re gonna get that on here but with good reason because my 5th book ‘The Ghost Beside Me’ is FREE on Halloween! This memoir style account relays the story of one lonely soul who connects with another not of this mortality. It’s short, powerful and most probably an important moment for me as the milestone 5th book mark was crossed with it – apparently after releasing that number of books things start to happen and well something good has been happening since on here… What if the greatest love story was also a ghost story?

A small town, an ancient monster and some history to boot – let’s face it that concept is right up my alley and ‘Rites of Passage’ makes for some decent wintery/Halloween reading. An ensemble of characters band together to fight evil on several fronts with some action and a few twists along the way. I first reviewed this one over on Reedsy Discovery…

Good and original vampire stories are hard to find but Villimey Mist is leading the charge with her gory but always enjoyable ‘Nocturnal’ series that begins with Nocturnal Blood. We see a young lady thrown into the world of vampires while also suffering from debilitating anxiety and OCD. She must endure a journey into what is just the tip of the ice cap as there is more to come from this series which will get the third book next year.

And so that wraps up part 2. Wishing you all a spooky Halloween and see ya’ll in the next one!