Remakes/ reboots in modern day cinema are as common as a rainy day in the UK and so the Stephen King classic gets the same treatment from maybe his most famous book adaptation, but every so often there comes a remake that stands out above the rest… 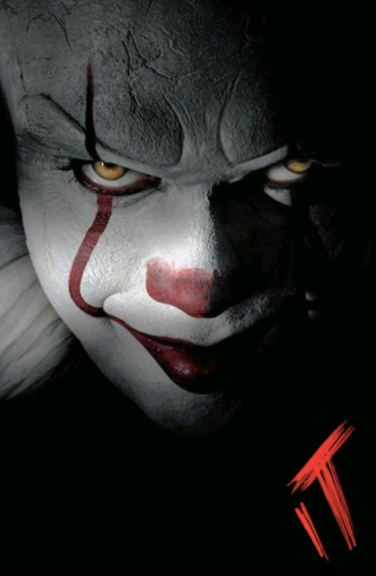 Yes I’m talking about what may be the best and most sought after film of 2017, last night I took full advantage of Empire Cinema’s ‘cheap day’ to check out new release ‘IT’ and I give you my word, not a pair of seats were empty. People were filing in after 20 minutes of the film beginning which tells me people wanted to check this out, and nobody left disappointed. Not that I can speak for the masses but in a word this film was Fantastic!

As some of you know I try my best to avoid spoilers and give most films a review that looks mostly at the good parts, in fact there were hardly any bad at all but we shall get to that..

It’s late 1980’s small town america, Derry to be precise and immediately we are introduced to a harrowing set of eyes glaring out of a storm drain up into the grey rainy suburban street.”Pennywise’ is shown in all his quirky and sinister style with actor Bill Skarsgård bringing a departure to Tim Curry’s version of the clown in which I couldn’t help be fond of in a weird way. To me he was just interesting to watch with his aura of mysterious evil and of course the ability to produce a mouth full of shark like teeth in which he uses right away.

What impressed me the most about this clown character was his psychological element. Pennywise manipulates the minds of children through their own fears and lures them to a horrific end. Hence why the town Derry has 6 times the national average of missing persons.

The main characters of ‘IT’ are made up of a close nit group of friends who eventually self proclaim themselves as the ‘losers club’. They are your typical middle of the road school kids who all have different problems of growing up. Eventually they band together in what is a perfect mix of chemistry between a wide variety of kids all bringing something different to the table, all with a light comedic mix to lighten many of the tense horror moments. Their portrayal impressed me and didn’t feel pushed at all, this was a group that all individually played a part in the team which set out to discover more about this clown. In a way they reminded me of Stand By Me, the Goonies and of course more recently Stranger Things which ticked a box in a big way.

Personally, I felt this film wasn’t that jumpy, now everyone has a different tolerance but I probably flinched once of twice and that’s a good thing. Too many films rely on jump scares where as this one played with your mind more, true Stephen King style. Yes it’s scary but there are too many other good things going on to write it off for just being a horror film. And yes Pennywise isn’t the only horror in this film for the ‘losers’. You’ve got passive aggressive and somewhat violent bullies, abusive or over protective parents along with the many missing children that all fit in and play a part.

I enjoyed this film all the way to the end and to me it didn’t drag or get boring at all. The pacing for such a story felt just right and the modest surprise at the end told us that this was just part 1.

Overall the scary sequences were scary and unpredictable, the cinematography looked great and the effects were consistently real. It wasn’t that scary and definitely worth a look even for some of the laugh out loud moments in dialogue between the kids. I’m looking forward to Part 2 and IT is easily a candidate for film of 2017!