On a sunny Saturday in a rural farm village known as Oradour-sur-Glane 642 innocent people were massacred by the German 2nd Waffen SS Panzer division. They just turned up out of the blue that morning. Women and children were herded to the local church and then grenades were thrown through the windows. The men were split up and put in the many barns that surrounded the area. Those barns were set alight and any one trying to escape were immediately shot. The small peaceful village was then practically levelled by German grenades and fires. A harrowing tale of unnecessary violence toward fellow man. War has always been the same and the survivors were less than 10.

Instead of bulldozing the wreckage, it was decided that a new town be built very nearby and the current remains left as a reminder, as a monument of the harrowing destruction and loss of life war brings upon this world. And trust me, I know this because I have been there twice, and it’s poignant, quiet and sombre. You can feel the atmosphere among the silence. The still charred stone of buildings along the high street. A doctors car still left with it’s door open, rusted and sunken into the ground. The church, now without a roof or stained glass in the window frames. Bullet holes in the walls and many more plastered over a WW1 monument. The museum that straddles the monument puts everything into context, without it, maybe the place would be wrongly conceived as just a ruin, because new generations forget, but within those crumbled bricks and a growth covered tram line is the truth of what history really serves, a reminder and lesson of where humanity went once, and a hope that we can learn from it. 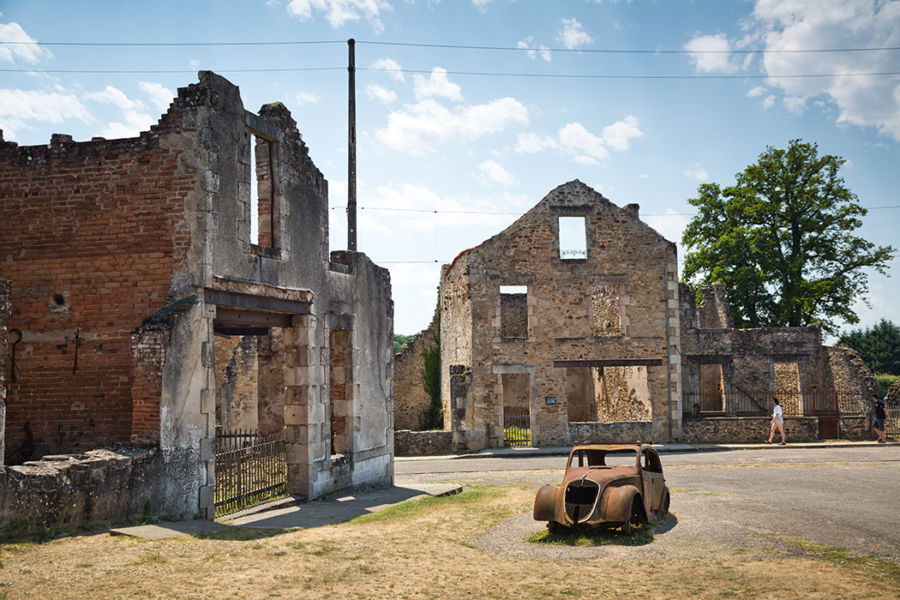 Statues fall and so does the lesson…

Every now and then a moment in history moves many people toward a desire for change. As humans we should always be trying to better ourselves. Regimes fall and over time they are forgotten mostly, or at least their context is. Those people who died on that sunny Saturday are forever immortalised by the wreckage of their home which serves as a monument. If the French authorities were to tear down this monument, or if a mob of protesters looking for change suddenly invaded it, then there would be public outcry.

I see the news and what is going on right now. I can only think the same thing when I see these mobs tearing down statues, some of people who serve important moments in our history. There is no thought, just spray paint and tear it down. Of course some of these statues represent people and a time far gone. Slavery or even genocide, people who probably shouldn’t be paraded in public places, but removing that statue and that name entirely is erasing history. Erase the history and you erase the lesson and again we lose our humanity.

Not for one moment should you think I agree with these statues and what they stand for morally once upon a time, I agree that they should stand as a reminder of where we were and where we are now. Like Oradour-sur-Glane in 1999 they opened that museum and gave everything some context, because people of that age were rapidly passing away, time takes away good people and memories of a certain time.

Put these statues in museums with some context beside them. People have lost reasoning because there is no context and they are desperate to see something done. Why is there a statue of this person? And more importantly why was it re homed to this particular exhibit.

You keep the history, you keep the lesson and eventually you reinstate humanity. I know what happened recently is terrible. And Black Lives Matter very much so, even more now than ever because racism needs to be stamped out and we can only do that via education and history. I’m 100% with everyone who’s feeds have become activist feeds recently, keep flying that flag, keep being proud to call bullshit on racism, but remember the history that got us here and view it in the context of modern day. This year alone has been the true test of humanity and we need it more than ever!