A ballad of love, life and destiny in the West… 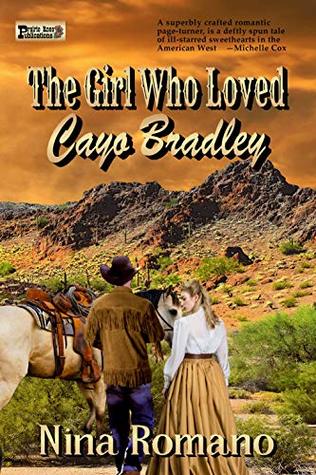 There aren’t many romantic masterpieces out there or stories where two souls are truly meant to be but this book is both and so much more. Nina Romano delivers an epic story of love and life while conveying a rich history of the American West. It’s both poetic and sometimes poignant while even being brutal in parts, of course the old world was back then and you cannot fault the factual elements that are intertwined with the fiction.

‘Darby McPhee’ is introduced to readers as an ambitious and even plucky young woman who aspires to find and education and be someone more than she is. Her roots consist of waiting hand and foot for her brothers and Father; it’s a life she would prefer to leave behind. Her conflict arises in the form of mysterious man known as ‘Cayo Bradley’ whom she is madly in love with. Their romance arrives while plans look to split them apart, one of them is a runner and the other is a lover, they seemingly spend the story going round and round in what is a journey.

‘”Forever” is a dream word. An Illusion. It really doesn’t exist’

On that journey we learn of ‘Cayo’s’ extensive backstory. As a boy he was unwillingly taken in by a Native American tribe and saw some truly brutal sights. He lived a whole life before ‘Darby’ ever arrived. As much as he isn’t a true born Native, they become his family and life force throughout even though Cayo never forgot his roots. On the other side of the world seemingly Darby is mixing with those of high society while achieving an education. Of course she meets various affluent suitors but in this case, her love and destiny is that mystery journeyed man ‘Cayo’.

‘He’s a ghost of my past in my ever present’

No matter what happens some things are meant to be and that’s what I took away after reading this book. The writing style is both immersive and inviting. It’s adventure, tragedy, history and love all in one tale.