A brutal tale of justice blinded by revenge… 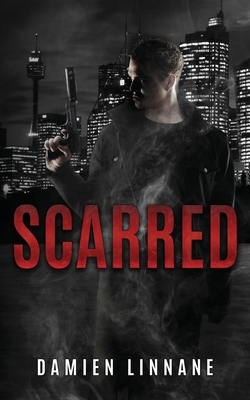 Scarred is exactly what the title suggests and Damien Linnane has carved a unique story telling path by bravely going to some violent and graphic places. It isn’t for the faint of heart but the places readers are taken make for a great story.

You have the historically abused and damaged vigilante in the form of Jason Ennis who leads the story while residing on the fringes of society. He’s the quiet type who could be Batman one day and then in the same breath a cold blooded killer, even though his motives could possibly be justified – the conflict which is genius in this story and that being whether or not Jason’s motives are the right thing to do? He’s complex and haunted by a childhood of abuse, his back story like all of the other principal characters is explored and told through the eyes of whoever is leading the scene. The view even switches in some scenes which is a credit to the author’s execution and work to achieve.

We also follow Howard who is at the other extreme end of life’s scale. He too is haunted by a dark past and uses it as a fuel on others sometimes brutally and graphically. In between the violence and sometimes depravity is a reason to go there, not for the shock factor but for the the greater good of a story which I eventually couldn’t put down.

There are so many messages within the story such as revenge not always being the answer and the true morality of justice. My only real critique comes from the writing style which chooses more often to show as opposed to tell – a rather cliche critique in book reviews and for this book the ‘showing’ works most of the time to immerse one in the depth of backstory and to get into the thoughts of characters.

For those who don’t mind some violence and graphic content, you’ll appreciate a story that goes to places of darkness and scarring to tell it while a few ‘bad guys’ get taken down in the process.

5 Stars – I enjoyed this immersive and sometimes brutal tale. Thank you to the author for reaching out! Reviews left on Goodreads and Amazon (UK)

One thought on “Scarred by Damien Linnane – Review”