Fun, quirky and most probably the strongest of the Quantum series! 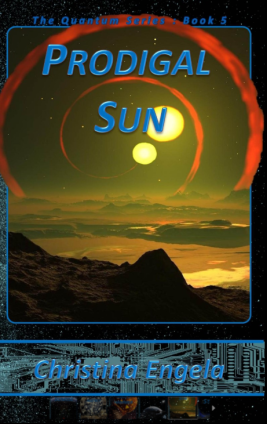 Christina Engela has a unique way of telling a story that has lots going on without making it seem confusing or cluttered. Having read all of the previous books in her ‘Quantum’ series this one carves a unique but powerful path that faces many issues without any fear.

Characters who have established themselves in this colourful and fun universe are taken somewhat by surprise much like the reader as a political supremacist group looks to overthrow the current regime on Deanna. In fact everything about the ‘Deannan Service league’ reeks of revolt but some revolutions aren’t for the greater good – a strong and relevant political message that many can relate to today.

We see Danielle Ferris; a student and transgender character who becomes directly caught up in the political overthrowing and subsequent storm. You cannot help but sympathise for her story which is one that is just of a person looking to be included and positive inclusion is a huge theme in this book much like all of Engela’s works they directly and sometimes indirectly set an example that champions everyone and anyone including the minorities.

As the story unfolded it became more and more gripping as events turn for the worse. Sheriff Peggy Ann-Muller may well be in over her head even if she does express exactly what is going on through a powerful quote ‘Anyone else want to be on the wrong side of history?’ Powerful is probably the one word which sums up the plot of ‘Prodigal Sun’ but as usual there is way much more happening. I have only just realized ‘Atro City’ is in fact meant to be pronounced as ‘Atrocity’ which is just one of the many fun quirks you’ll find in this great read! Left very much open and on a cliff hanger, I shall be diving right into the next story!

5 Stars – Great read, review left via Goodreads over the holidays but now I am back to review more indie books! You can expect a review of the next book in the Quantum series soon!