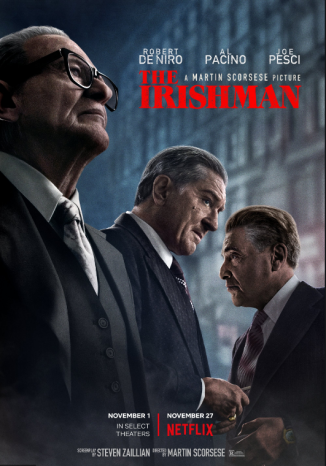 For a gangster epic ‘The Irishman’ feels subtle in some senses, especially for Scorsese who is known for that ‘Goodfellas’ style of telling you it how it is and who could forget the fourth wall breaking style that he adopted yet again in ‘the Wolf of Wall Street’.

In the earlier stages of this film it takes a little while to work out that this is the story of a Henchman/Problem Solver/ ‘House Painter’ known as Frank Sheeran portrayed by Robert De Niro who may be the greatest actor of a generation. It is on this journey that Frank delves deeper and deeper into the world of ‘bosses’ and he meets Russell Bufalino (Pesci); a somewhat quiet but powerful type. In this world Frank becomes renowned for ‘problem solving’ and it isn’t long until his perhaps not so reputable ways of handling business is noticed. Al Pacino plays the man (Jimmy Hoffa) who notices Frank’s efforts and they develop a bodyguard/adviser friendship.

It’s obvious to see these three greats of cinema have aged but that doesn’t take anything away from their performance, in fact they may be older but arguably better than ever at portraying the characters they did. There’s a combination of computer generated effects and make up that works well in showing their age and perhaps youth. This is a story that is told over time.

For a Scorsese film it runs long but with a sense of freedom this time around. Scenes of dialogue feel extended almost as if the camera starts rolling prior to the plot lines being anywhere near said. The truth is I never noticed the film’s length even if I did watch this in 2 sittings (I go to bed early on weekdays, it’s how I stay looking this good…). Not once did my attention waver and the story felt somewhat final in some senses like this could be it for a generation of gangster films like this. Easily I could imagine a story like this being turned into a serial of five or so episodes. The three hour plus running time would let you watch it that way.

Those who are familiar with Scorsese’s works will thoroughly enjoy this, a film with cinema worthy presence. Anyone else I would recommend it to just for the level of performances that compliment a great story. I enjoyed it.