A conclusion of my love letter to Scotland and the city of Edinburgh. And so my second day in the city consisted of two activities…

Escape Reality – the No.1 Escape room in the world!

I’m not sure if Escape Reality is the no.1 escape room in the world but it is certainly good!  Located just a few tram stops from the city’s central Princes street we then made the short walk to Fountainbridge.

Our party of 9 were split into two and we were given a choice of two escape rooms out of 6. Of course the crew that I captained chose the ‘Nosferatu’ game, me and Vampires kinda go hand in hand, or hand in stake shall I say. (pause for laughter…) The other crew headed up ‘Machina’ a ‘terminator’ style themed room.

Once inside we were tasked with a game of figuring out vampire families and an eventual way to a ‘cure’ via several rooms that opened upon finding various different clues and cracking  locks. Mind your head when examining some secret cupboard doors because they may fling open into one’s face!

There was even a clever game involving words which a wordsmith like yours truly somehow cracked. Eventually we found our way into ‘Nosferatu’s’ lair and armed with a stake we slayed that motherfu**er! Overall the room was of medium difficulty and our team working together finished just two minutes shy of the time limit.

Escape rooms are an ever growing popular concept that I highly recommend, and Escape Reality were great hosts! They boast to have game locations in the US, UAE and India!

And so our sights set themselves onto the main event of our short tenure in Edinburgh and it involved beer! 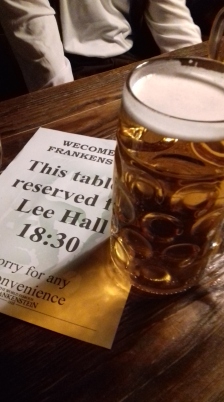 ‘The world famous’ Frankenstein’s is a three storey themed bar that was pretty damn awesome. We had booked the basement bier keller experience – an Octoberfest style set up in Scotland? Trust me it works and along with an awesome three course meal we all had ourselves a 1 litre stein of beer (we had to pay separate for this) and one stein will set you back around £8 so it isn’t that bad in terms of pricing seeing as a pint in the UK costs north of £4 these days… so it was worth it!

Overall the service was great and we were well looked after. Frankenstein’s is a unique place and even the walk there was quite picturesque via the hill and past the Royal mile. For anyone looking for an interesting themed bar I would highly recommend this place!

What a great city with an awesome vibe. Considering the short time we spent there, I guarantee I shall be returning as there is a lot more to explore. The castle would be something I would have loved to of seen but time was of the essence. If you are flying from London, its literally 50 minutes in the air. My top tip would be to watch out for the return flight if you are using Edinburgh airport, it gets busy on a Sunday! 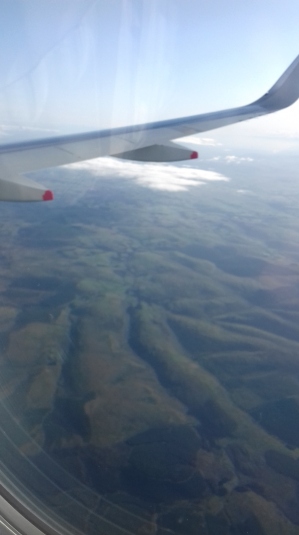