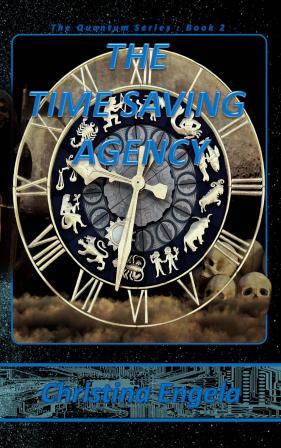 Only two months previous were the citizens of Deanna dealing with the threat of an alien attack but now another threat of perhaps greater proportions emerges from the fabric of time, quite literally.

Christina Engela has created a story that follows not only a similar concept of the previous entry into the Quantum series but one that fuses those ideas with something completely different and original. Written in a way that sometimes tributes Terry Pratchett, yet again readers will find this story quirky and clever with a style that confides in the reader.

Familiar faces Gary Beck the ‘badfella’ and Cindy Mei Winter return as their story together continues and while that is happening the main story arc begins to unfold from an unexpected place; the fabric of time where there are Time Agents and Time Terrorists. What ensues is a cat and mouse time travel story seeing ‘Agent Scrooby’ trying to track down the evil genius and escaped terrorist known as Brad Xyl who has dastardly universe destroying aspirations. Scrooby enlists the help of Bounty hunter Gary Beck and together they set out to to put Brad Xyl’s plans to a halt.

Although Cindy Mei Winter takes more of a cameo role along with ‘Fred the Arborian’, in this story Cindy’s journey and life as a trans-woman is briefly touched upon giving an important and positive modern spotlight on the subject.

Overall the Time Saving Agency is a fun read which see’s the ‘Quantum Series’ taken on an unexpected journey of time travel while also continuing the journey of it’s characters seen in the previous book in the series. The narrative is delivered with a sophisticated level of humor and sometimes sarcastic wit that never allows for a dull moment.

4 thoughts on “The Time Saving Agency by Christina Engela – Review”

Leave a Reply to Have You Read The Quantum Series? You Should! | Christina Engela: Author Cancel reply