A sometimes absurd but always fun story of the future… 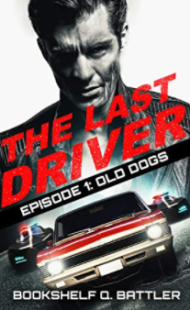 I picked up the kindle version of this book for 99p after noticing it via the blog of Bookshelf Q. Battler which I follow.  Set in a not too distant totalitarian type future where the ‘freedoms’ we have today are severely reduced in some creative and original ways. This gives ‘The Last Driver’ an interesting and potentially limitless premise which carries the central story by comparing the future with present day.

Although I felt ‘dystopian future’ type vibes this book is far from the stories typical of that genre. There are still the usual traits such as media control and censorship but they are cleverly conveyed and even contain a level of humor in which I enjoyed. In fact the humor is what kept me hooked and I read this in a matter of days.

Told through the eyes of older gentleman Frank Wylder; his story bounces between the future and 2010 when he was younger so automatically the reader will able to relate with his struggle to describe the world he once lived in. Pop culture references are used frequently in the earlier stages and they tend to mostly aid the story as opposed to some books where they are unnecessary in usage.

Frank owns a classic car in a world of self driving vehicles and driving a car is in fact a thing of the past, this should give enough insight to the world in which he lives. In particular my most enjoyable part of the story was the description and depiction of ‘state approved’ channels and even a ‘state approved newsreader’ conducting an absurd ‘debate’ piece. I used the word absurd but it is also funny and worrying close to how some news outlets already operate.

Overall I found this book enjoyable and very readable. The ending was left open for a potential sequel which I would be interested in reading. I recommend it to anyone looking for a an enjoyable and insightful look into the future.