Yep, you read that title right. CEMETERY HOUSE, the sequel to Open Evening has an official release date! There’s a teaster trailer currently making the rounds of the Facebooks so if you see it, remember to give an indie author a hand by liking, sharing and commenting….

Seeing as I haven’t blogged in quite a while here’s a rundown of all the recent news from the universe of Lee Hall, procrastination extraordinaire and sometimes word smith…

Click on me to view the trailer, you know you want to… 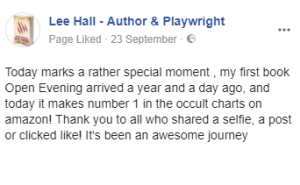 A few weeks back I celebrated the 1 year anniversary of becoming a published author via the arrival of Open Evening. For a few days the E-book of both Open Evening and Darke Blood were available for free (I only intended the first book to be free, so a cock up on my behalf). But either way the reaction was massive, and already I have received new reviews from new readers. And I have to say the numbers of downloads were record breaking for me. A new personal best came on the 23rd of last month with over 600 e-books being downloaded. Of course if you were watching, Open Evening shot up the Occult charts on amazon all the way to Number 1! Awesome right?

Drafting finishes for the Teleporter!

My next book will be a novella/shorter story called the Teleporter, and it is predominantly a super hero comedy with elements that break the fourth wall and has some politically loaded messages. Last month I managed to finish the first draft and will hopefully be looking at a release in the fist half of 2018. You can like the Teleporter’s page right here. 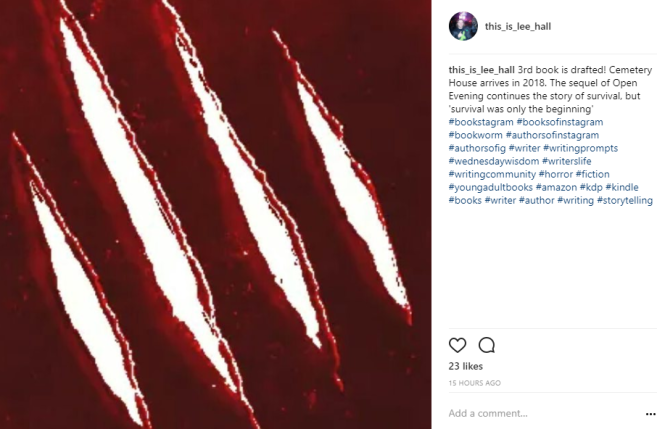 Seeing as I have already decided upon a release date for Cemetery House you can probably guess editing is going spectacularly well. The story is shaping up and will be somewhat of a departure from the first one as much as a continuation. Of course I plan on developing characters and giving answers to the readers along with linking this all in with the Darke Blood universe in which a crossover will follow. If you liked the first one, you will love this one, trust me.

All I can really say now is thank you for the continued support, reviews, likes and shares. This whole indie author thing only works if awesome people like you who use their right and left turn indicators help me!!