Just when you thought there were enough super hero stories in this world, we made another one…

My next book’ The Teleporter is officially out now in both paperback and e-book formats.

Some of you will have seen the official announcement via my FB page and you can see a snippet of it below.

This book is predominately a comedy with fourth wall breaking elements and a genre aware story telling style very much seen in Open Evening. But is also a departure from horror and moves my work into a more lighthearted area of reading. Having written comedy only once before for a live action play I am already having a lot fun putting together the pieces that will make up a promising project.

The main character of the Teleporter will tell you very early on that ‘super’ and ‘hero’ are both dirty words in his story and to me they are also. Even though they describe the genre to an extent this book wont be the standard guy trying to save the world. Cinema and television are inundated with comic book hero types and there seems to be no signs of that slowing down anytime soon. Both Marvel and DC are juggernauts in producing these stories which seemed to be unlimited, taking that into account and the success of more comedic swaying stories I have decided to make my own.

The Teleporter is a character I have explored before and it didn’t really get very far. After producing other books I have found some more material and background for this story of a guy who can teleport and that’s about all. Back when I devised this character I did it because there doesn’t seem to be someone who can just teleport, it is a pretty useless super power which will just add to the comedy.

The influences are many in the Teleporter; Deadpool and Hancock come to mind along with Kick Ass and even the Hangover. This is an internet age hero who finds himself no choice but to fight for what is right in a situation.  That is even if he has a slight drinking problem.

You can catch the Teleporter on Facebook and even like his page for support, so check it out. 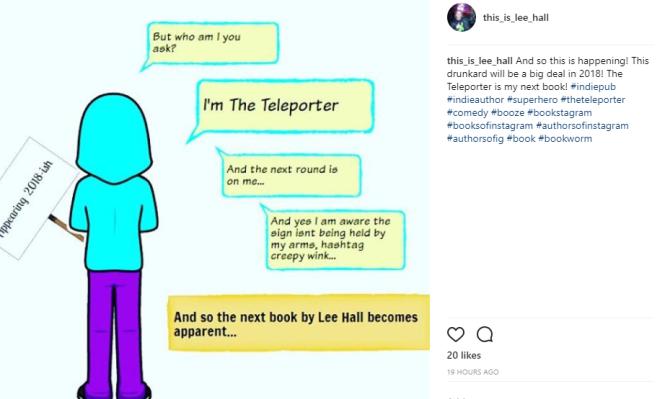