Before you scroll past this blog link which seems like click-bait, it isn’t. If there’s one thing I love it’s a good conspiracy theory. As the internet becomes more and more powerful and public free speech continues in most places there will always be conspiracy theories. So here’s my take on some personal favorites. And there may be a special very soon to be relevant theory that may just be fiction, or not…. (nudge/ wink)

Many will say this is where the birth of the ufologists came from, yes there is a name for people who study this stuff. I have even had the pleasure of working with someone who used to be a ufologist and seeing as I love a conspiracy we have spent many a night shift discussing this stuff.

In 1947 something crashed on a ranch near Roswell, New Mexico. Wikipedia says it was a balloon and so did the military, but the press and eyewitnesses said something different. Of course in all reports like this there are difference of accounts and opinions. Some people saw a ‘flying disc’ and those who found wreckage of what crashed was made from a material described as ‘nothing made on this earth’. So how could this be a weather balloon? Further witness reports even suggested ‘bodies’ were removed from the crash site wreckage. Aliens?

Over the years many people tried to debunk what the military firstly reported, there were books written and several eye witness accounts going into the hundreds. Roswell itself cashed in big on the theory and see’s tourists flock there every year. But what did really happen?

In the 90’s the US military eventually released two statements. Firstly they concluded the wreckage was most likely from a high altitude surveillance balloon used in something called Project Mogul. Then they tried to explain the presence of ‘bodies’ recovered from the wreckage. Memories of accidents involving military aircraft combined with them using dummies in previous projects were to blame for people thinking they saw ‘bodies’ when they didn’t. Seems legit huh?

Either way Roswell was a cool conspiracy theory and the alien autopsy that came out in the 90’s adds a new spin on the whole thing, but was proved to be a hoax.

You cant help but let your imagination jump to several conclusions when you see this pic. Now to me the figure seen behind the little girl looks like somebody fencing (sword fighting).

Taken way back in 1964 by a man named Jim Templeton in Cumbria UK, he seems to have captured more than he bargained for. Many people contest that this photo is indeed an alien or spaceman. Mr Templeton claimed at the time the photo was taken there was nobody in the background so it wasn’t until he got them back from Kodak that he saw this.

Kodak confirmed the photo was genuine and hadn’t been tampered with. He even took it to the local police who found nothing suspicious about it. To make things strange Jim was even approached by two people who claimed to work for the government. They asked him to show them the site and then abruptly left after. Weird or what?

This is a largely unknown one, but still cool if you get my drift? So back in the early 2000’s a forum appeared on the now defunct or forgotten geocities web hosting service (remember that?). The original site was deleted long ago but someone did manage to grab a few screen shots of the original forum. 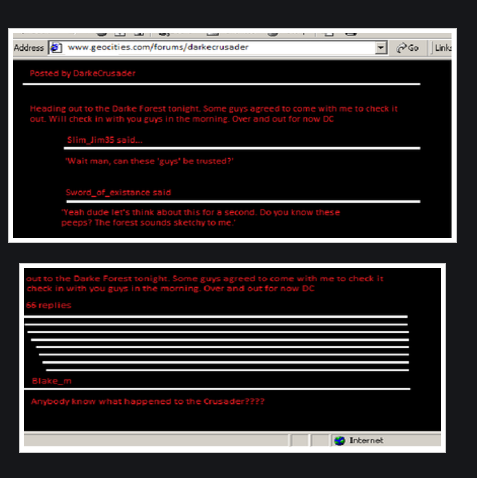 The Darke Crusader whom runs this forum talks of visiting a town where things start to get weird. The last entry talks of this ‘crusader’ going into the forest. That was the last anyone heard of the host. The only trace left is of this website which appeared recently.

After spending many hours of boredom combing YouTube and Google I stumbled across what is my favorite and creepiest conspiracy theory.

The Ural mountains, Russia, 1959; cold war territory. A group of mountain trekkers braved the snow on a expedition which would claim their lives. All of them were highly experienced on the mountains. During their hike the weather gradually worsened and moved the group off course. They eventually set up camp on an open mountain side as opposed to a nearby forest area which would provide better coverage from the elements. None of them knew at that point that was their final camp.

Eventually the group were reported missing and rescue efforts were mounted. All 9 of the expedition were found dead but this is where it gets really weird. Their tents were torn from the inside and there were signs of the group fleeing the area without adequate clothing for the weather. They were running from something.

The camp discovered later on by a rescue team

Initial investigations confirmed 6 of the group died of hypothermia whilst the others had signs of trauma caused by something physical.  Another suffered brain damage but with no obvious cause from impact. What made this even weirder was one woman was found with her tongue and eyes missing. Some of the group were found separately whist others had grouped together, but what happened to those people on the mountains of Ural?

Well the camp showed no signs of intruders, the group left there willingly. Many of the injuries they had couldn’t have been caused by an animal such as a bear. There was a theory suggested an indigenous people lived near by, but were believed to be peaceful.

The bodies and condition of their organs was never made public.

Other hikers 50km away from the camp reported the sight of ‘orange spheres’ seen in the sky that night which points towards military. But the investigation concluded a ‘compelling force’ had caused the Dylatov Pass incident, but maybe we will never know. There are some great resources of this theory on youtube but remember when your watching this stuff at 2am, don’t have nightmares….