May has arrived, and for me this is the biggest month of my writing life! Darke Blood arrives in a mere few weeks so this entry is a dedicated retrospective of all things Darke. I will be talking about the story, the inspiration behind it and of course my extensive attack based marketing plan which is already in full swing! This is Darke Blood, a retrospective look.

My first real television hero in life was female. Many of you will know whom I am referring to but before the days of the Avengers and the seemingly endless tirade of cape wearing redemption seekers there was Buffy Summers. One of the very first female leads in television that was perceived as strong and later on independent. This might not appear a big deal today but we still have a very long way to go in terms of diversity in all forms of storytelling,  although cliché does have a big factor to play in that but so does society. 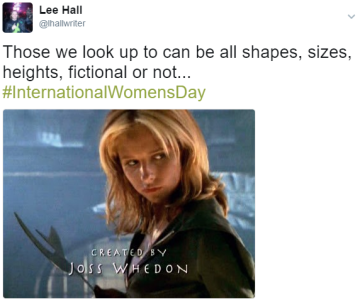 Joss Whedon created Buffy with a view to flip cliché and embrace the quirky differences many of us have. The real horror in a world of vampire slaying wasn’t the demons coming out of the hell mouth below the high school, it was the high school (something I used in Open Evening). A clever and different story followed from this premise with the introduction of a character orientated story and the ever important humour that brings it away from any real darkness. As the high school in Buffy crumbled so did the change of horror, now it was surviving college and struggling to date someone who’s actually mortal. Eventually it shifted again with adulthood becoming the real theme of Buffy, either way the characters had each other to deal with whatever life faced them and that is above all what inspired me to write stories, the resolve.

After finishing my first published novel Open Evening, there came a decision I needed to make. What next? Very quickly the genre of vampires and witches came to mind, but there were two reasons for this. Firstly I had always wanted to do vampires just to pay homage to my favourite television hero and secondly, these stories still sell and are arguably more popular than ever. If you look at TV and literature, in the last decade there has been more than one big time vampire or witch story . So to me this seemed like the perfect idea to step into.

I’ve already shared the somewhat painful drafting process Darke Blood I went through so I wont dwell on it but there was the question of what exactly does it pay homage to? Well, stories speak to people in different ways, go ahead and read a book you’ve read before, give it a few years and your perception, mood and current lifestyle all come to play in how you perceive it, sometimes it will even change.

As I have read through Darke Blood after the several edits and of course the back and forth with my editor, I think I have finally grasped what it’s about and what it really pays homage to. That being strong female lead characters and our need for them even more so today.

Hence I have come full circle in life, from sitting in front of the TV as a 12 year old kid on a Thursday night, to writing my own take on Buffy. And if you ask me Darke Blood is so much more than homage to a TV show which broke boundaries back in the day.

But isn’t the main character in Darke Blood male?

In essence there are two lead characters in Darke Blood one is male and the other is female. But throughout the narrative our female is the stronger and somewhat a leader, but it isn’t about breaking down those boundaries because Buffy did that, this is about that concept working alongside with the other.

What set’s Darke Blood aside from other stories of the same genre?

Well this book doesn’t spend the whole time paying homage to Buffy, it has an independent identity and my own take on vampires. We are all led to believe that vampire stories have to fit into a certain set of rules, rules which have just been there since the Van Helsing days. You know, using garlic and having to invite a vampire in. Instead of these tales of folklore, why not add a little science to vampires? Maybe even define vampirism as a disease which in fact could one day be cured. What if there was a blood substitute, after all it’s a chemical right?

Same goes for my take on witchcraft. If you break that word down, you are left with ‘craft’, so what if there were different particular crafts? Again I used the science route to redefine and somewhat invent my own version of magic but strictly keeping it close to a reality where this stuff could actually be possible.

Both vampirism and witchcraft are just sub-themes, as much as they are unique selling points that give the book it’s rounded appeal, the main theme of Darke Blood is identity. Main character Blake Malone soon finds conflict within himself as the realization comes apparent that his memory seems to be blocked. Along the way of trying to resolve this conflict he discovers the forces of vampirism and witchcraft accompanied by some very special nods towards Open Evening. I will say no more.

How are you going to implement Darke Marketing?

My first book was always going to be a trial and error experience. Many lessons were learned and a lot of stuff came up that I probably should have done but wouldn’t have been aware of unless I took the plunge into publishing (if you get what I mean?).

In terms of marketing as an independent author I am pretty much the General or architect of my own success. But social media is the king of book sales and so my efforts towards it have gone up tenfold this time.

What I have already done

This was my first experience of making something like this and to be fully honest it looks okay. The whole idea of this trailer was to get the name out there and of course the release date. Over 700 people have viewed it so far, and if I can convert even a small percentage of that figure into sales then we shall be off to a good start. I even had some good people share it which is always fantastic so thanks to those that did.

Yep if you’re lucky you may have an email from me in your junk box. This sort of thing is imperative to get the word out early. Loyal friends are great way to get in early reviews and get the ball rolling. Sign up now by following this blog with your email address to receive future stuff for free.

What will you be doing?

Ask some peeps to guest blog on my site

Email my loyal followers – sign up on this site today to receive future news first and even exclusive pre sale content.

So as you can see I have a huge list of stuff planned. This month there will be all hands on deck from me to give Darke Blood the best chance it has of being a success. I do hope you can join me, this story isn’t just about vampires, witches and identity. It isn’t just about a homage to Buffy or female lead characters. It’s about all of them and so much more!