Now before I and at least one person who reads this gets carried away, let’s just say those two words are always written ironically the first time around. I know more than most that a writer’s work never really ends.

Yesterday I overcame odds which seemed to pile up around me back in April. Back then my story seemed to have no way out, it felt boring and lacklustre. Amongst the few cool concepts there was just no way I could continue this and get a book out of it. It even made me a tad angry.

Now that’s all in the process of creativity, I have learned. Especially this time around. Ever since I dropped my previous robot crime futuristic project I have tried to write in a way where I am not attached emotionally to the narrative.

Yes, anything I write means a lot to me, but the stuff I am now writing leaves me willing to chuck it all towards the publishing fire and spend it on building a readership. This doesn’t mean the product will lack in quality, there is just less emotion on the line if it fails.

My arrival as an independent author is important and imminent. Tomorrow will see the final performance of my first written and directed play by Iver Heath Drama club. A beta arrival if you say where my work and voice can hopefully be seen, all portrayed by some wonderful performers. 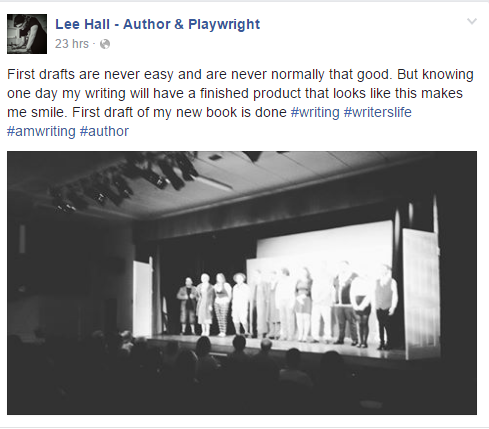 Back track to last year and Open Evening was born, a soon to be published debut novel by me which I am ever so proud to bring out. After finishing that and organisation of the publication I had a great energy to see if I could do another. Not a sequel but another stand-alone book in the genre of mystery and thriller (there will be more about it very soon). By the turn of this year my efforts were well under way for this next story and everything became apparent.

With the balance of shift working and trying to write amongst a social life that tended to decline slightly, my back was firmly against the wall. Consideration must be taken into account as I had very few plot or themes to work with. This book was the child of spontaneity. I planned badly and tried to rely on the Open Evening formula, that being a story which I have seen a thousand times which poured onto the page. This next project not so much, in fact this has been my longest draft to date, just shy of 7 months.

Only my experience and dedication alone got me out of this project in one piece and still my record for starting a project and completing it remains, just about. Next I shall be taking a week or so off writing. Then my attention turns to the final edit of Open Evening, just in time for it to go towards Satin Publishing and then to my readers.

As I said a writer’s work is never done.

Oh and one other thing, my next book is called Darke Blood!

The Hall of information officially opened for business nearly two years ago with a dedication to gaining more followers. With every entry over that time I can happily say that the follows have slowly crept up to 70. Something which two years ago Lee wouldn’t have thought a realistic thing.

My whole premise is to build a loyal following of good tasted people who will buy my book when it first hits the shelves this September. Yes, Open Evening will make its journey over the summer through a professional cover artist and professional edit. Hopefully a wonderfully polished product will come out the other side and will be something I am more than proud to share with you.

This blog is titled a journey to publication and it is during my year of writing that the destination is sitting just before the horizon now. A year so far which has seen me over come a high level of writers block type frustration along with adapting to being a shift worker. Things will just take longer to create from scratch from now on. My latest draft of a new title will hopefully reach completion with in a few weeks and maybe I will divulge some more info on that soon.

In other writing news my first play will make its way to the stage next week. Hotel doom stars an all talented cast of fine actors and actresses who have worn my writing like a glove. Their input has been amazing and we have a great show. It would be a shame if the audience numbers do not match the level of this show so if your in town next week then check it out here.

I would like to take this opportunity to thank everyone who has ever supported me on this journey of writing. Whether you have simply liked a status, retweeted or followed me in some capactity I can only do this with your help. Let’s get some new faces out there on the shelves with decent meaningful stories to tell.